This boutique pizza place, SIDNEES WOOD FIRED PIZZA is located within the Quest Hotel at North Ryde in NSW, Australia. We booked ahead and they were quite flexible with moving times around. It was pretty hard to get a hold of them since you can only do phone bookings and the phone isn’t answered all the time – usually just during lunch or dinner times. Otherwise it’ll go to the hotel reception.

There also isn’t any online presence for them so you can’t check out the menu or order delivery when they do deliver within a 5km radius. It’s a missed opportunity for a place that serves really delicious food, although quite pricey for pizza prices but understandable because they are gourmet-style and super tasty.

We got there right at 5pm which is their advertised opening time for dinner and what looked like a lobby area was actually part of the adjoining restaurant, Atlantis Bar & Grill within the hotel also.

A woman and man were sitting on the couches, chilling and when we came in, they looked right at us and greeted us. It took a moment for us to realise they worked there and they apologised as they were just recovering from a very busy lunchtime – understandable since there are a lot of corporate offices in the area and it was just before Christmas so there would’ve been quite a few celebratory lunches.

They told us we could sit anywhere and we noticed an outdoor covered area at the back and decided to go there. Looking around there were a few people there hanging out and once they saw us, they got up and went inside. Then we realised they worked there and were just on their break. Sorry to disturb you guys, we’re early dinner eaters for some reason.

About 5 minutes passed when I realised the woman wasn’t coming back to give us menus like she said she would – so Kekai had to go inside and request one. We ordered one of the meat pizzas (can’t remember exactly which one) and the fig and haloumi salad to share along with some drinks.

The staff were pretty nice, I guess we just caught them while they were waking up, in a way. We waited about 15-20 minutes for the food, I guess they were just reopening the kitchen and had to restart the wood fired oven.

It was nice to relax out there, the view of the back of the hotels and the greenery that was extended from Lane Cove National Park.

When we got our food, it was presented well and our mouths were watering – but still took a few seconds to take some snaps before we devoured it. 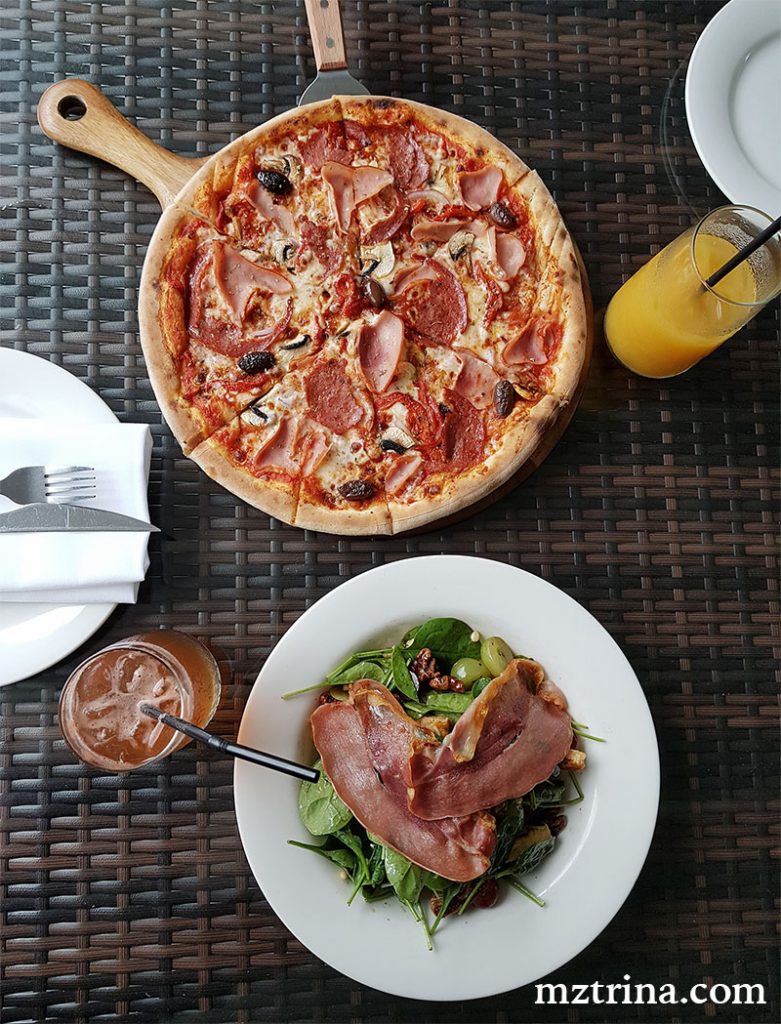 The pizza was divine and so tasty with a perfectly thin crust and balanced amount of meat and spices. The salad was so refreshing – it had figs, prosciutto, haloumi, grapes, pine nuts, candied walnuts and spinach.

We were amazed at this hidden spot producing one of the best pizzas we’ve had in Sydney (even better than that from Made In Italy in Pyrmont).